Credit: Wikimedia/Architect of the Capitol

In July, we began a polling project to measure public confidence in government institutions on national security matters on an ongoing basis. This post provides our data for the month of April. It includes perceptions about government institutions and about the two major political parties’ handling of national security; about the president’s handling of key national security issues; about Special Counsel Robert Mueller’s investigation; and ongoing military operations. It also includes data on public attitudes toward President Trump’s nominee to the head the CIA, Gina Haspel, and new data on people’s relative trust in President Trump and former FBI Director James Comey on the matters in dispute between them.

Whom Does the Public Believe: Trump or Comey?

This month, between April 24-26, we reran the same poll. The results are once again striking—but for a different reason: After a year of both attacks on Comey and revelations about the president’s conduct, the numbers have hardly moved at all. A plurality still chooses “I don’t know” over either man. The percentage believing Comey has moved only 0.2 percent from last year, which is to say from 29.6 percent to 29.4 percent. And the percentage believing Trump has risen only 2.3 percent—to a measly 19.4 percent. In other words, not only does uncertainty and doubt rain, but neither man’s numbers have moved perceptibly at all.

Unsurprisingly, the party breakdown here is sharp. Independents and Republicans are more likely to say “I don’t know” than are Democrats. Comey has the trust of 57 percent of Democrats, with only 6 percent believing Trump. Among Republicans, by contrast, only 9.7 percent believe Comey. But even here, Trump has only middling support: 38 percent. An absolute majority of Republicans either does not know whom to believe (35.4 percent) or believes neither (17 percent).

Between April 25 and May 6, we polled public support for Gina Haspel’s nomination to head the CIA. Fully 62.5 percent of more than 7,200 respondents had not heard of Haspel. An additional 15.3 percent were unsure if they had or not. This left a sample of 1,083 respondents to answer this question: “Some worry Haspel was involved in the CIA's use of harsh interrogations while others think she is a qualified leader. Do you think the Senate should confirm her?”

The results are astonishingly even. Opposition to Haspel’s nomination beat support for it by two tenths of a percentage point: 38.6 percent to 38.4 percent.

Again, the partisan divide is sharp. Independents are evenly split, favoring Haspel by a 38.5 percent to 36.9 percent margin. Democrats overwhelmingly oppose her: 60.4 percent to 14.2 percent. Republicans, meanwhile, even more overwhelmingly support her: 73.8 percent to 13.4 percent.

We will run this survey again after Haspel’s nomination hearing this week.

In the last week of April 2018, we used Google Surveys to ask respondents the following questions about confidence in institutions:

The rise in confidence for the intelligence community from March to April breaks a trend we had seen of confidence in the intelligence community declining every month since December. Conversely, the slight drop in support for the military continues a trend we’ve seen every month in 2018. Yet the military remains, by far, the most trusted institution to protect U.S. national security. 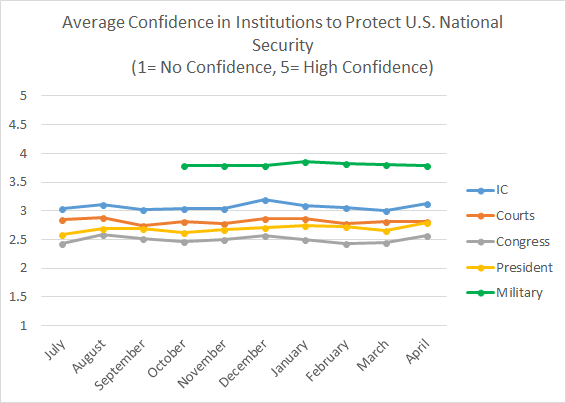 Confidence in the Republican Party also increased from March to April, but not as much as the rise in support for the Democratic Party. Thus, the national security “gap” between the two parties narrowed, breaking the trend of a widening gap we had seen every month in 2018.

In our second question, we ask which of the two parties will do a better job on protecting the country from international terrorism and military threats. On that question, the Republican advantage increases markedly when respondents are asked to choose between the parties or options of “neither” or “don’t know.” When forced to choose between the parties, the split is nearly even, with 51 percent preferring the Reublican Party and 49 percent preferring the Democratic Party. Conversely, when the given the option of stating no preference or uncertainty, a noticeable gap opens up, with 32 percent of respondents choosing the Republican Party, and 21 percent choosing the Democratic Party. For the third straight month, more respondents chose “neither” (25 percent) or “don’t know” (22 percent), than selected the Democratic Party, which also demonstrates that a near majority of people don’t have a clear party preference in this area. 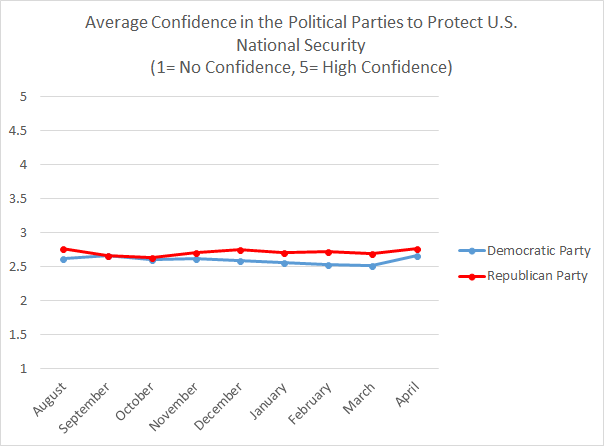 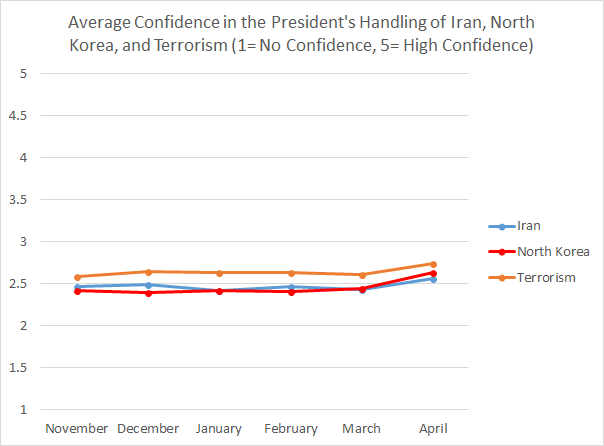 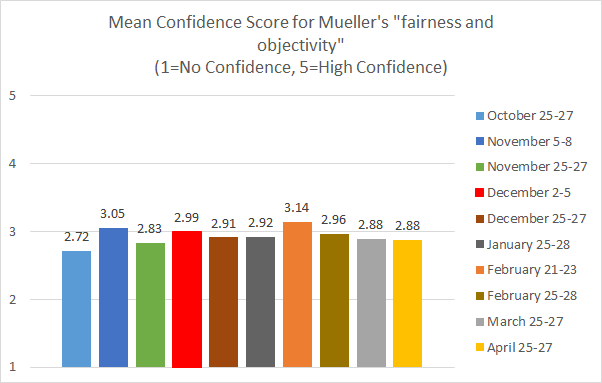 Once again, the military enjoys the highest level of public confidence of any government institution we asked about (a 3.78 on our scale), yet confidence in ongoing military operations in Afghanistan and Iraq-Syria is markedly lower, with average confidence scores of 2.87 and 2.73 respectively. This is the first poll we conducted following President Trump’s call for U.S. troops to leave Syria, yet public confidence in Iraq and Syria held steady from March to April, indicating the public was unmoved by, or unaware of, the President’s remarks. 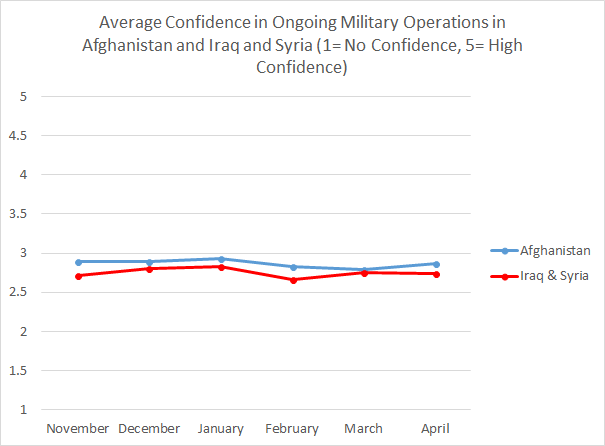 This month, we also reran our monthly probe of public confidence in the authorities of the intelligence community. These numbers have bounced around within a very narrow range since we began asking this question last October. No discernible trend has emerged. The lowest confidence month followed immediately the highest confidence month. So we regard public comfort with intelligence authorities as essentially stable. This months average (3.12 on our five-point scale) is right in the middle. The stability of these numbers is unsurprising since the last half year has seen neither any intelligence community scandals that would make the public worry about intelligence authorities nor major national security events of the sort that would tend to make people wish for more aggressive intelligence operations. 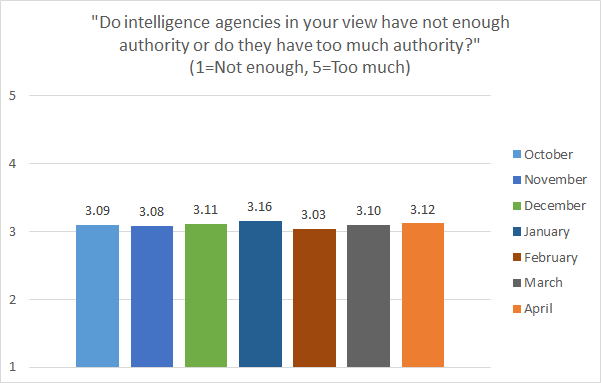 From April 25–28, we once again used Google Surveys, which is supporting this project with a large in-kind donation of access to its survey platform, to ask a variety of questions related to national security. Respondents are internet-users aged 18 and older who answer “surveywall” questions on websites that use Google Opinion Rewards for Publishers to access content. Surveys appear on a network of more than 1,500 sites, including USA Today and the Financial Times. For more information on Google Surveys’ methodology, including questions regarding sampling bias and inferred demographics, please see Google’s white paper on the topic. Benjamin Wittes and Emma Kohse also discussed criticisms and advantages of the Google Surveys methodology at some length in this paper.

Editor's note: This post has been updated to include new information.